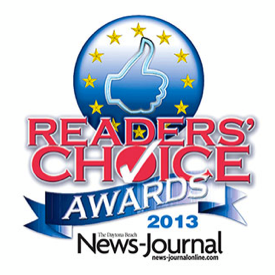 PALM COAST, Fla. - SeaGate Homes has long been recognized as one of the premier homebuilders in the state of Florida for its high standard of construction, attention to detail, excellent value and satisfied customers. That recognition became a little greater recently as the company received another accolade to add to its fine reputation. The Daytona Beach News-Journal rewarded SeaGate’s service to Florida’s homeowners with the “Best Home Builder” title in its 2013 local Readers’ Choice awards. It is the fourth consecutive year that SeaGate has won the title, showing that the company is a leader in the Daytona Beach, Palm Coast, and St. Augustine areas.

The prestigious local award is a reflection of the positive influence SeaGate Homes has had on the local homebuilding industry since it was founded in 1994. In the words of SeaGate president Robert Gazzoli, “This award is especially important because it was the public who voted for us. It goes to show the impact of customer satisfaction, something we take pride in.” Since readers of the newspaper chose the award recipients, SeaGate’s ability to satisfy customers is what shone through above all of the company’s other positive traits.

The Palm Coast-based homebuilding company was also able to collect the award due to its ability to reach a wide audience - it has been constructing northeast Florida homes in Flagler, Volusia and St. Johns counties for almost two decades. In that time, SeaGate has served many communities from St. Augustine to Edgewater. The company is known for its diversity of product and flexibility with full customization. The company maintains an inventory of lots for customers without land or will build on lots already owned by the customer. Additionally, the company builds “spec” homes for customers who would prefer to move into something already built. SeaGate is also renowned for its fine warranty policy, including a unique fifteen-year structural warranty.

The Daytona Beach News-Journal is the leading daily new publication in the Volusia and Flagler county areas and has been serving the community since 1883. Their Readers’ Choice awards are a premier annual competition to find the best companies in the area.